I often wonder why people are so patronising toward me. I mostly assumed it was down to me being care free and laid-back. I didn’t really take myself seriously, so why should others? This changed once I started studying for a degree in English Literature, I started to take myself and my life a little more seriously compared to how I had in the past. However, I was still being treated as though my voice wasn’t as valuable as others. I knew immediately that sexism played a role in this. However, I had no idea that why upon figuring this out I still felt perplexed.
I guess this is something that dawned on me since coming away from an academic place. I pondered over why I still felt incapable in comparison to my peers. I distinguished that what I felt was far too familiar and it dawned upon me that along with sexism I had another setback: ableism. I’ve always felt I had to prove myself when it came to psychical activities because of the way I was born. I had to try extra hard just to prove myself to others that I’m “just like you don’t worry I can do everything you can do”. I didn’t think this would also take place in a setting where there was no correlation between my disability and my performance. But, even though I was in a classroom setting, even though I was in a place where my physical disability wouldn’t affect my performance whatsoever, I felt as though I was being treated as such. 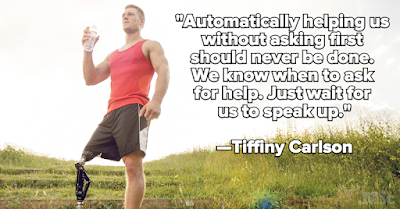 I think part of that stems from growing up believing my life wasn’t worth as much as others because I was disabled. But I also think it comes from able bodied people genuinely believing that too. I’d also like to point out that even if my disability did have an impact on my academic studies, would that make my point any less valid? Does it make me, or any other disabled person unworthy of education, unworthy of a voice? Well, according to society, yes it does, because that is exactly what is happening.
For disabled people, it is heavily ingrained in us that it’s our fault somehow; this is who we are so we just have to deal with it because of the cards we were dealt. Here’s what I mean: people genuinely believe disabled people are worthy of the treatment they get because they do need assistance and different help compared to able-bodied people. The problem with this is that instead of blaming society for not catering to all different types of individual disabilities, we blame the people with the disabilities themselves. Maybe not vocally or even subconsciously, but we do. In fact, I actually did for a long time too! 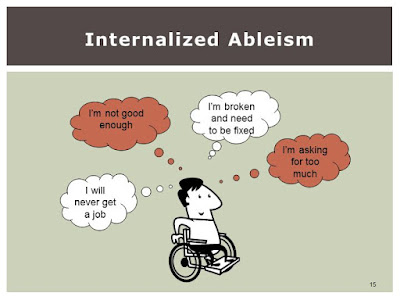 You may be thinking about how I came to this conclusion. And I’d love to tell you I conducted an intricate experiment to gain this view but I didn’t, it is simply just how I feel*. I notice people staring, I still get comments, confused glances, and people flinching and shuffling away. I know my disability makes people uncomfortable because I’ve lived with it for 22 years of my life.
When I started to feel incapable I desperately wanted to know why. I had heard that mansplaining was an issue because of the male/female classroom dynamic and I thought that was bad but now there’s able-bodied-mansplaining too? It’s really aggravating having someone else explain something with an oh-so-condescending tone; something that you already know. The worst part is they probably know you already know because you’ve just spent 10 minutes explaining it yourself before they decided to take the lead. I’m still unsure if I feel this way because most of the men I’ve encountered in academic spaces are pretentious and annoying or if this is something that happens frequently**. As aforementioned, I haven’t carried out studies to come to this conclusion but ask anyone who identifies outside the norm – they’ll know exactly what I’m talking about.

I no longer want to be seen how I’ve always been perceived: “the girl with one arm”. Firstly, because I’m not a girl, secondly, I’m not one arm. I’m one and a half – Or one and a Guinea (I’m attempting to make Guinea notorious).
I hate the idea that there are so many people out there who have earned their place somewhere but don’t feel as though they’re worthy because of societal norms. So here’s to the “lesser’s” and the “loser’s”: you are capable. You only feel incapable because you don’t fit to a certain archetype of what capable is supposedly meant to be. Believe in yourself for you are strong.
Peace and love.
* If anyone knows of any studies to back this up please let me know
** I’d love to gain more insight into others experiences of mansplaining and ablebodied-mansplaining (yes, I have coined this eloquent, established new term; feel free to use it).

I've been back in Cambridge for just over a month now. There are many things I…

For those of you that don’t know me, my name is Emily Tisshaw and I was…